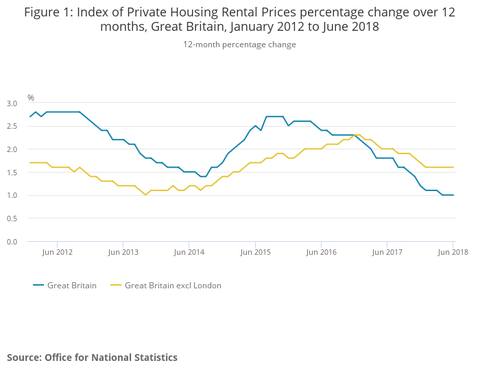 Buy to let rents are stagnating with no movement since April, according to the latest official statistics.

Private renters saw rents maintain their 1% rise in the year to June 30.

In London, rents were down 0.2% in the year, with no change in the rate since May, says the latest Index of Private Housing Rental Prices from the Office of National Statistics.

The study shows that the rate of private rent increases has slowed across the country since December 2015.

“This slowdown in the growth in private rental prices in Great Britain is driven mainly by a slowdown in London over the same period,” says the ONS.

The study also reports two other yardsticks for rents.

The Royal Institution of Chartered Surveyors says their research suggests tenant demand has stayed flat for five months in a row and that fewer buy to let homes are coming to the market.

The Association of Residential Letting Agents (ARLA) has found more private rented homes are available to rent than in previous months, but too few are on the market.