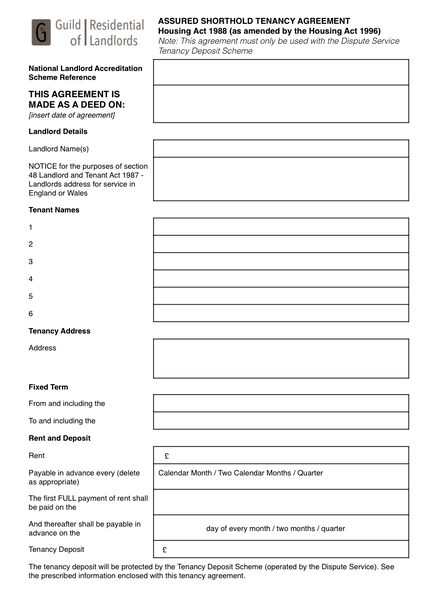 This assured shorthold tenancy agreement may be used by either landlords or letting agents where the deposit is to be protected with the Tenancy Deposit Scheme operated by the Dispute Service.

The guidance for completing the agreement and checking it’s suitability is now on our website rather than an additional page built into the tenancy agreement.

This agreement must not be used for the following purposes:

02/16 – inserted the new how to rent guide as published by the DCLG, February 2016. Also, added a clearer ground 1 and 2 notice and made small change to subletting clause.

10/15 – Inserted new October version of the “how to rent” guide and allowed (with prior consent) a “home business” to be operated from the premises. Minor change to the burning solid fuel clause.

09/15 – Updated for major law changes for all tenancies granted on or after 1 October 2015 in England (agreement still suitable for Wales). Changes include:
* addition of new service of documents by e-mail boxes to be completed
* built in the “how to rent guide” (for use in England only)
* added our document checklist form
* added a smoke and CO alarm test certificate
* added legionella info
* clarified about open fires not to be used without consent

06/15a – Minor correction to couple of grammar errors.

06/15 – Major overhaul to the terms of the tenancy agreement. Most clauses have had some minor tweak and some have been replaced altogether. Some of the main areas of change include:
* major change to the landlord repairing obligations further clarifying notice requirements regardless of where any defect is located as a result of recent Court of Appeal rulings
* general overhaul where necessary to include Universal Credit
* changes to utility and council tax clauses
* rearrangement of many clauses and new headings to give a more fluid feel to the document as a whole
* many grammatical improvements throughout
* the absolute prohibition of sub-letting or assignment (without consent)
* improvements to the fire safety clauses
* improvements to the data protection clauses
* addition of some new clauses
* improved formatting for when a duplex printer is used (two sided printing)

08/14 – Fairly big update. Changes to continuation, subletting, notice to terminate and ending tenancy clauses. Also added new clause about delivery of notices including by email. Minor change to prescribed information as a result of changes.

02/14 – Amended requiring deposit on or before commencement and clarifying that the tenancy is not a receipt for the payment of a deposit. Amended the prescribed information to reflect the changes. Updated to our new logo which is slowly being phased in.

06/13 – Changes made to avoid potential problems created by Superstrike Ltd v Rodrigues [2013] EWCA Civ 669 so that prescribed information will not need to be served when tenancy goes periodic.

02/13 – Added new clause under rights of entry section about consequences of failing to allow a viewing with a prospective tenant (including council tax liability). Also amended the prior clause.

12/12 – Major overhaul of tenancy agreement including amending of many clauses. Added new green deal acknowledgement as required by the green deal legislation. Also made the document a deed for all cases (including less than 3 years).