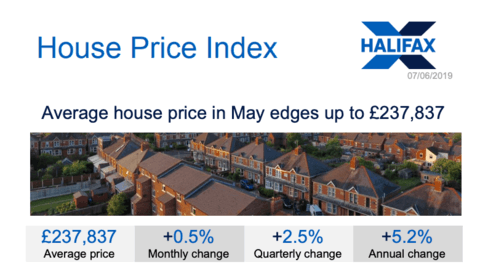 The Halifax House Price Index has thrown up some questionable figures for the second month in a row, but should homeowners and buyers really go along with what the statistics say?

The Halifax claims home values have increased 5.2% in the year to the end of May, following a similar posting in April.

The Nationwide – another index that wins acres of column inches – posted similar figures for April.

But property people should take the figures with a big pinch of salt.

House prices are going up, but not that fast in most places.

The Halifax data comes from the bank’s own mortgage transactions, so is not representative of the whole UK market because only a sample is used.

The data could also be skewed by the Halifax demographic – where customers live and their incomes.

For instance, the Nationwide has a larger south and east England customer base, where the Halifax is traditionally considered to have more customers in the north.

Other factors that can impact independent indices include if the data is based on mortgage applications or completions, as completions are based on agreed advances after a property is valued, not before the price before the surveyor calls.

Then there’s the argument about the value of an average property.

There’s no such thing and the figure is meaningless for homeowners with a one bedroom flat or four bedroom detached house. The neighbourhood where they are located has a big impact on prices as well.

So where can property people look for reliable housing market data?

Most property experts would look to the Land Registry housing data for more reliable figures and trends.

The Land Registry includes cash as well as mortgage transactions for every lender. The timing of the report lags independent indices but presents a more rounded picture of the market.